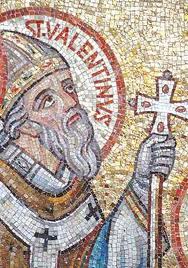 An Essay on Valentine’s Day

The word Valentine has to do with human sacrifice. Self-sacrifice and martyrdom are not new. They go back to the Iron age when Virgil in his Book IV, dramatically depicted the departure of Aeneas for the Trojan war leading to Dido’s plunging a knife into her breast and sacrificing herself for the love of Aeneas. And we know that during the reign of Roman Emperor Diocletian (244-311 AD) Christians were caught and fed to the lions. Were those professed Christians who risked their lives and became dinner for the Emperor’s hungry lions on a suicide mission as are today’s fanatic suicide bombers of Islam? A good question to reflect upon…the martyr sacrificed self. The fanatic bomber(s) sacrifices self and kills innocent others. That is murder. Fortunately, things got better for Christians after Emperor Constantine (272-337 AD) converted to Christianity in 313 AD. The same persecuted Christians under Diocletian were now pampered and given cushiony jobs under Constantine. What a difference a mere 75 years make!

History tells us that there were three Saint Valentines and the one we westerners strongly identify is the Saint Valentine of Rome who was a priest martyred in 269 AD by the orders of Diocletian. Some 200 years later Pope Gelasius I (he was the Pope when Saint Augustine ’345-430 AD’ became the Bishop of Hippo) decided to recognize Saint Valentine’s love and devotion for Christianity and established by papal order the Saint Valentine’s Day. It was not until Chaucer days in the fourteenth century England when the feast of February 14 first became associated with romantic love, a pure Anglo invention.

For this was on seynt Valentynysday Whan euery bryd cometh there to ches his mate.”

Chaucer Parlement of Foules, circa 1381.

Our Saint Valentine comes from mid-15th century, “sweetheart chosen on St. Valentine’s Day,” from L.L. Valentinus, the name of an early Italian saint (from L. Valentia ”strength, capacity;”). Choosing a sweetheart on this day originated 14th century as a custom in English and French court circles- meaning “letter or card sent to a sweetheart”. The romantic association of the day is said to be from it being around the time when birds choose their mates.

For the past seven centuries the invention has served us well. Imagine the number of weddings that have been facilitated and children conceived by Saint Valentine. Incidentally, the etymology of Valentine is from Latin valentines means valence, and the word value takes its roots from the same origin.

Many people think that falling in love mimics a state of psychosis- a confirmation of this notion comes from Shakespeare’s insistence of the “fine frenzy” of the poet- the madman and being in love are indistinguishable insanities. We all have done the crazy “falling in love” things that there are to do-up all night, romantic breakfasts at dawn, impulsive trips to exotic isles, heartfelt torrents of vows, and suddenly becoming a poet fluid with sentiments and expressive powers… There are a whole host of brain chemical and neurotransmitters such as dopamine, catecholamine, indolamines, endorphins etc., involved in libidinal activities.

Recently however, we have begun to associate the phenomenon of falling in love with a chemical that churns in our body causing us to do crazy things. The molecule is called Phenylethylamine (PEA), a first cousin of amphetamine, which the body produces in its adrenal glands. PEA causes excitement just as amphetamines do. However, it is not as disruptive as amphetamine. Leading scientists and neuro-endocrinologists insist that biochemistry and psychiatry have a definite place in explaining the phenomenon of romance and falling in love. Why should this be left exclusively to poets and Harlequin romance writers. Scientists, too, have a lot to say about it.

There are people who are in constant need of excitement and romance. These are probably the people who have affairs outside of marriage, or those who have multiple marriages while chasing their need for constant stimulation and excitement. These individuals engage in many love affairs. It is suggested that high PEA victims may be suffering from a bipolar affective disorder (manic depressive) form of illness. In order to reach their highs, they must be in love and constantly enjoy the infusion of PEA in their body and brain. Examples of famous PEA levels are folks like Elizabeth Taylor and Marilyn Monroe, and Zsa Zsa Gabor. Some years ago, British psychiatrists coined the appropriate diagnosis of hysteroid dysphoria to explain the phenomenology of high serum PEA. It was never accepted by the American Psychiatric Association and as to what it leads people to do. A male reader, an emeritus university professor wrote and suggested that we should include the male genre. After all, we have had our share of sustained elevated PEA in males, folks such as Don Juan, Machiavelli, Bill Clinton…And do not forget our current President…